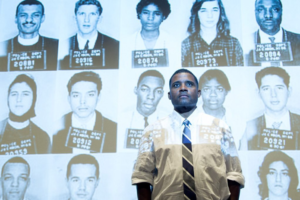 In celebration of Black History, the Friday Center for Continuing Education proudly presents a theatrical performance presented by acclaimed actor and playwright, Mike Wiley. His one-man play, Breach of Peace, pays tribute to the 1961 Freedom Fighters Movement. The event will take place on Sunday, February 16, 3-5 p.m. at the Friday Center.

May 24, 1961 was the day 19-year-old Jean Thompson’s father had prepared her for her entire life. “My parents always talked about the injustice of segregation, but they were optimistic; they didn’t feel like it was going to last forever,” Thompson recalled. “They raised us to be ready. I remember my dad saying the day will come, and when it does, you should be ready.”

On that day, she boarded a Trailways bus in Montgomery, Alabama with 11 young Freedom Riders bound for New Orleans – and history. Within three months, approximately 300 other riders took up the mantle to desegregate buses, following the path of the first brave few. Mobs bloodily assaulted many. Others were arrested shining a light on a brutal, segregated South. Breach of Peace is based on true accounts of surviving participants of the Freedom Rides as well as many other individuals involved in the early struggle for African-American equality.

This solo-play and multi-media performance, is a living monument to those remarkable young men and women of various races, religions and backgrounds who rose to face the dangers of fighting for just and equal treatment for all. Breach of Peace offers a powerful lesson of freedom, equality, and the triumph of the human spirit.

Mike Wiley is a North Carolina-based actor & playwright whose compelling works of documentary theatre yield rich and powerful journeys to milestones and turning points of the African American experience. Each work in the company’s productions is designed to inspire audiences to examine America’s racial history, teach the lessons of the past and encourage the application of these truths to the present. With a remarkable ability to inspire dialog, Wiley’s overriding goal is expanding cultural awareness for audiences of all ages through dynamic portrayals based on pivotal moments in African-American history. Wiley has introduced countless students and communities to the legacies of Emmett Till, Henry “Box” Brown, Jackie Robinson and more. His recent works include The Fire of Freedom – the story of Abraham Galloway, adapted for the stage by Howard Craft and based on the book by Dr. David Cecelski; a one-man play based on Dr. Timothy B. Tyson’s memoir Blood Done Sign My Name; and Downrange: Voices on the Homefront (chronicling the challenges of military families post 9/11). Wiley recently completed Leaving Eden, a Playmakers Reparatory Company commissioned work that explores the cycles of history, human behavior, race and economic disparity through inhabitants of a small North Carolina town.

Wiley has a Masters of Fine Arts from the University of North Carolina at Chapel Hill. He is a 2017 recipient of UNC’s Distinguished Alumnus Award, which recognizes alumni who have made outstanding contributions to humanity. In 2010 and 2014, Wiley served as the Lehman Brady Visiting Joint Chair Professor in Documentary Studies and American Studies at Duke University and the University of North Carolina at Chapel Hill. In addition to his numerous school and community performances, he has appeared on The Discovery Channel, The Learning Channel, National Geographic Channel and been featured in Our State magazine, PBS’ North Carolina Now and WUNC’s The State of Things.